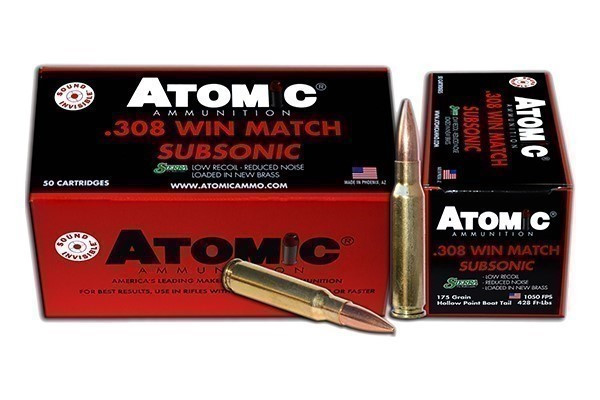 Atomic Ammunition’s newest product, their .308 Win Subsonic is unlike any high powered rifle ammunition. It is quieter than most .22 Long Rifle ammo, has virtually no felt recoil, produces the same energy and power as many .40 S&W police service rounds and delivers excellent accuracy past 100 yards from rifles with barrel twist rates of 1 in 11’’ or faster.

This specialty ammunition is perfect for younger and smaller framed shooters who are learning to shoot their family’s full size hunting rifles, seniors who have become recoil sensitive due to age, persons who only have access to indoor shooting ranges that do not allow high powered rifles because of the noise they generate that echoes off of the walls or fear that the bullet will generate so much power that it will pass through or tear up the backstop. It can be fired on smaller plots of land that are safe for firing handguns but where a miss with a rifle bullet would likely travel beyond the property, or the use of a full powered rifle load would disturb nearby neighbors.

It is a perfect round for ranchers to dispatch varmints and predators such as coyotes or bobcats that prey on young calves and small livestock, with a reduced chance of scaring larger animals into a stampede. Subsonic .308 is also the rifle cartridge of choice for military and law enforcement tactical professionals as well as civilians in over 35 states to use with suppressed firearms because the bullet does not reach or exceed the speed of sound and does not create a loud sonic boom as it travels.

This relatively innocuous cartridge, with its low recoil and report will serve many shooters, new or experienced, young and old with an alternative target and varmint round to the loud, harsher kicking standard .308 cartridges at a price on par with standard .308 ammunition, not the much higher, nearly double in price commonly associated with our competitors subsonic .308 ammo.